5 Major Challenges Facing School Districts and How to Overcome Them

Now that the school year is well underway, teachers and administrators are likely taking note of what's working while also acknowledging any new and old issues that may be rearing their heads. From data collection to student safety, here are five common challenges facing school districts, along with their potential solutions:

Challenge: Ensuring kids stay in school
To put it simply, students can’t learn if they’re not regularly attending classes. Indeed, students who miss at least 10% of the days in a single school year are deemed chronically absent, which is considered a precursor to dropping out and potentially even finding oneself before the court. With every absence, it becomes harder for students to catch up—and to feel motivated to do so.

Potential solution
Given their myriad responsibilities, teachers may not always be able to fully address absenteeism with students and their families. With this in mind, some districts employ a school attendance officer to make sure students get to school, as well as to help chronically absent students and their parents turn things around. As reported by the National Education Association's NEA Today, when school attendance officer Lois Yukna of New Jersey's Woodbridge Township District “noticed that students who were frequent no-shows at school were the same ones whose behavior when they attended resulted in detentions, suspensions, and, sometimes, trouble with police,” she worked with one of the district's guidance counselors to create a grant-funded program that is focused on restorative practices rather than suspensions. As a result, students have access to mentorships and internships, while parents are equipped with resources that help them encourage their children to go to school.

Challenge: Keeping students safe
According to a 2018 Pew Research Survey, “57% of U.S. teenagers are worried that a shooting could take place at their own school [and] 1 in 4 are ‘very worried’ about the chance.” One can hardly blame them, given the much-publicized school shootings of recent years—with the 2018 shooting at Marjory Stoneman Douglas High School in Parkland, Florida, gaining particular notoriety. But although active shooter drills have become commonplace at many of today's schools, the lengths to which these drills sometimes go in the name of realism can have adverse, traumatic effects, with the experience of encountering roleplayers clad in active shooter gear and firing off blanks or rubber bullets leaving some students more scared than prepared.

Potential solution
“The analogy that I use is we don't light a fire in the hallway to practice fire drills,” said Melissa Reeves, a professor at Winthrop University and the former president of the National Association of School Psychologists, in an interview with NPR. “When we're teaching stranger danger, we don't put a child on a street corner and have someone grab them and scare them.”

In other words, there are ways to educate students about how to act in dangerous situations without running as high a risk of inflicting psychological (and, indeed, physical) harm. As a preventative measure, schools are advised to invest in a roster of counselors and mental health professionals to help troubled students feel they have someone to talk to before their emotions escalate to a tipping point.

Challenge: Swiftly accessing valuable, actionable data
Despite being collected and made available to educators, student data is not typically utilized to its fullest capacity. According to EdScoop, “33 percent of districts and teachers say ... the information they need is in too many places for them to access conveniently.” Echoing these findings, only 8% of respondents to a leadership survey conducted by the Consortium for School Networking considered the digital content in their district to be fully interoperable.

Potential solution
To avoid leaving valuable information on the table due to lack of convenience, EdWeek suggested that districts make better use of data analytics tools to consolidate and individualize information. Fully deployed analytics programs can provide the most concise and up-to-date insights to teachers, thereby reducing the amount of time needed to comb through charts and graphs from various sources while simultaneously informing decision-making that will optimize student success.

Challenge: Teachers going on strike
Since West Virginia teachers created the Red for Ed movement in 2018, their peers in Oklahoma, Kentucky, Arizona, Colorado, California and beyond have been inspired to follow their lead. While strikes to secure pay raises, smaller classroom sizes, better classroom funding, improved mental health services for students, and increased per-student spending have yielded some gains (including a 5% pay raise for West Virginia educators), those at the forefront of the movement say there is still much work to be done.

Potential solution
Building upon the existing momentum, teacher walkouts are likely to continue unless educators' concerns are addressed; thus, districts are advised to proactively come up with ways to avoid shutting down completely for the duration of these actions. For instance, when teachers in Los Angeles went on strike early last year, administrators stepped in to provide lessons to students consolidated into large groups by grade.

Challenge: Unfunded mandates
Although state and federal mandates for school districts are usually issued with the best of intentions, schools frequently find themselves without the time and resources to properly address new requirements that fail to include adequate sources of funding. After exhausting all other options, administrators have no choice but to reassign funds previously allocated to other parts of the regular education program.

Potential solution
First and foremost, lawmakers should be called upon to thoroughly examine the potential implications of un- or underfunded mandates by asking questions such as "What will this cost?" and "Where will these funds need to be pulled from?" While lawmakers may believe they are acting with students’ best interests in mind, it is important to consider what complying with a mandate may take away from other educational areas.

Once a mandate has been passed, districts are encouraged to think outside the box when undertaking the work of balancing the budget. For instance, when funding was lacking for mandated vision and hearing screenings in Arizona schools, the Arizona School Boards Association sought to “have health care providers come in and do those screenings, because they can do them and get reimbursed for them, [whereas] school districts can’t,” the Arizona Education News Service explained.

The bottom line
The challenges facing school districts can seem as complex and multifaceted as districts themselves, with potential solutions that seem optimal for one party often turning out to be less than ideal for another. Despite these roadblocks, educators and administrators must persist in doing the best they can with the resources they have in pursuit of a core goal: minimizing the negative impact on their students.
Back To All 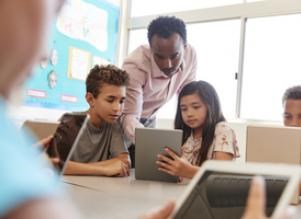 Bringing Literacy Policy to the Next Level with Effect Size