Book reports are a valuable tool for assessing students’ understanding of independent reading, but writing report after report can become rote for students—and reading them can be equally tedious for educators. Fortunately, there are a plethora of alternative methods to accomplish the same goal. Take a look at these fun and effective alternatives to book reports and get your students (and yourself) out of the report rut.

Making movies based on popular books is a Hollywood staple. Have students create an “elevator pitch” (i.e., a pitch delivered in the time it would take to ride an elevator) that explains to a producer why the book would make a good movie, give suggestions about who should play the characters, and identify an element that might need to change for the movie version. This activity obviously works best with books that have not already been made into movies.

If students read a book has already been made into a movie, they can write a comparison between the book and the movie. They should include information about key changes from the book and develop ideas about why these changes were made and how effective they were.

Have students create a portrait of a character from the book they read. The portrait should be made up of words and symbols that represent the character. For example, if a character is a computer whiz, the outline of her face might be made up of ones and zeros like binary code, and her eyes might be computer screens. This is a great way to integrate the arts into a literacy lesson.

Have students take a close look at several book covers and make a list of common elements they see, such as the title, author, images, book blurbs, etc. They can also list some examples that were effective and some that were less successful. Then, have students design a cover for the book they read. They should be able to explain the elements they chose to include and how they relate to the book.

Blind date with a book

Related to designing a book cover, give students plain paper that is not see-through, such as butcher paper, and have them each wrap the book they read like a present. Then have them write words or short phrases that describe the book on the paper without giving away the title of the book or its author (and, of course, no spoilers). Place all the books on a shelf and let students browse through the offerings and select the next book they want to read based on the words and phrases on the cover. You could also make this an ongoing project and designate shelf space in the library for “blind date” books.

Interview with a character

Sometimes a character in a book feels so real that you can almost imagine talking to them. Have students write questions they would ask a character in the book they read. When they have finished writing the questions, have them answer these from the perspective of the character. If a video camera is available, students could create a mock talk show with literary characters as the interviewed guests.

Almost everybody has seen a movie trailer that made them really want to see the movie. Students can create a similar trailer for the book they read. There are many choices for free video editing software—including WeVideo, Windows Movie Maker, and iMovie—that students can use to create transitions, add special effects, edit out mistakes, and add audio. This type of alternative book report also helps develop 21st-century digital skills!

Have students create a persuasive argument—without spoilers—about why other students should read the book. To make it more exciting, have one student be the “chooser” and let two students take turns trying to persuade that student. Encourage the persuaders to adapt their arguments based on which classmate they are trying to persuade.

Have students create a podcast relating to their book. They could podcast from the perspective of a character or retell the book’s story in a series of short episodes. Students can easily record the audio for their podcasts on a computer or smartphone. They can also use a free sound editing program—such as Audacity or GarageBand—to edit their recording. Then, they can upload the audio file to your school website to share with colleagues and parents. If students aren’t familiar with podcasts, they can listen to podcasts such as Youth Radio and StoryCorps before creating their own.

Have students condense the book they read into a comic strip/graphic novel or a picture book. Challenge them to tell the whole story in the new format, not just one section of the book. If appropriate, students could read their books to younger students.

Selecting the right excerpt from a book to share with an audience can be challenging. You might select an excerpt that gives a good sense of a particular character, or one that showcases the author’s writing style, or even one that ends on a cliffhanger so your audience will have to pick up the book to see what happens next. Have students select an excerpt from their book to read to the class. Ask them to write an explanation of why they selected that excerpt and how it relates to the book as a whole.

Have you ever loved a book, but wished it ended differently? Give students the chance to get the resolution they want by rewriting the ending of the book they read. Then, have them explain why they made the change they did.

Have students analyze the plot of the book they read by creating a roller coaster on a large piece of paper. The coaster should have the five stages of a plot from Freytag’s pyramid: exposition, rising action, climax, falling action, and denouement. Students should draw cars along the roller coaster that use words and/or symbols to visually explain each part of the book.

Sometimes a book is so good, you just don’t want to say goodbye to its characters. Have students pitch an idea for a sequel to the book they read as if they were speaking to the editor. They should include a basic outline of the plot, any new characters, and an explanation of why the book deserves a sequel. Taking this a step further, you could have students write the first chapter of the sequel after making their pitch.

Another point of view

Point of view is a key literary device. Have students retell a part of the book they read from a different point of view. They may choose to use first-person point of view or third-person narration to switch to the perspective of a different character. This is an opportunity for students to explore the unsaid motivations of secondary characters.

Have students create a board game about the book they read. For example, the game could advance players when they answer a question about the book or move players backward or forward based on problems and solutions from the book. In her article "Fifty Alternatives to the Book Report," Diana Mitchell writes, "Students tire of responding to novels in the same ways. They want new ways to think about a piece of literature and new ways to dig into it." This lesson invites students to respond to texts in a new way while also helping them focus on key points in their books. 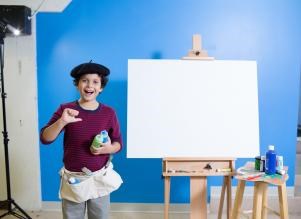