“Your accent is the way you sound when you speak.” This quote from the Linguistic Society of America highlights a truth that is increasingly important to the teaching of language and literacy: Everyone who speaks English does so with an accent.

According to Statista, 1.35 billion people around the world speak English but only 7% of the world’s population speaks English as their native language. To prepare all students for an increasingly globalized world, teachers should normalize the idea that English is English, in any accent.

Even within native English-speaking countries, accents vary by region and are heavily influenced by heritage languages. Within the U.S., it’s easy to distinguish between a Midwesterner and a Southerner just by listening to how they speak. Americans’ immigrant and indigenous roots are evident in both our regionalized accents and in the languages that are spoken at home, beyond English or Spanish. I doubt I’m the only one who sees the following chart as a WOW: 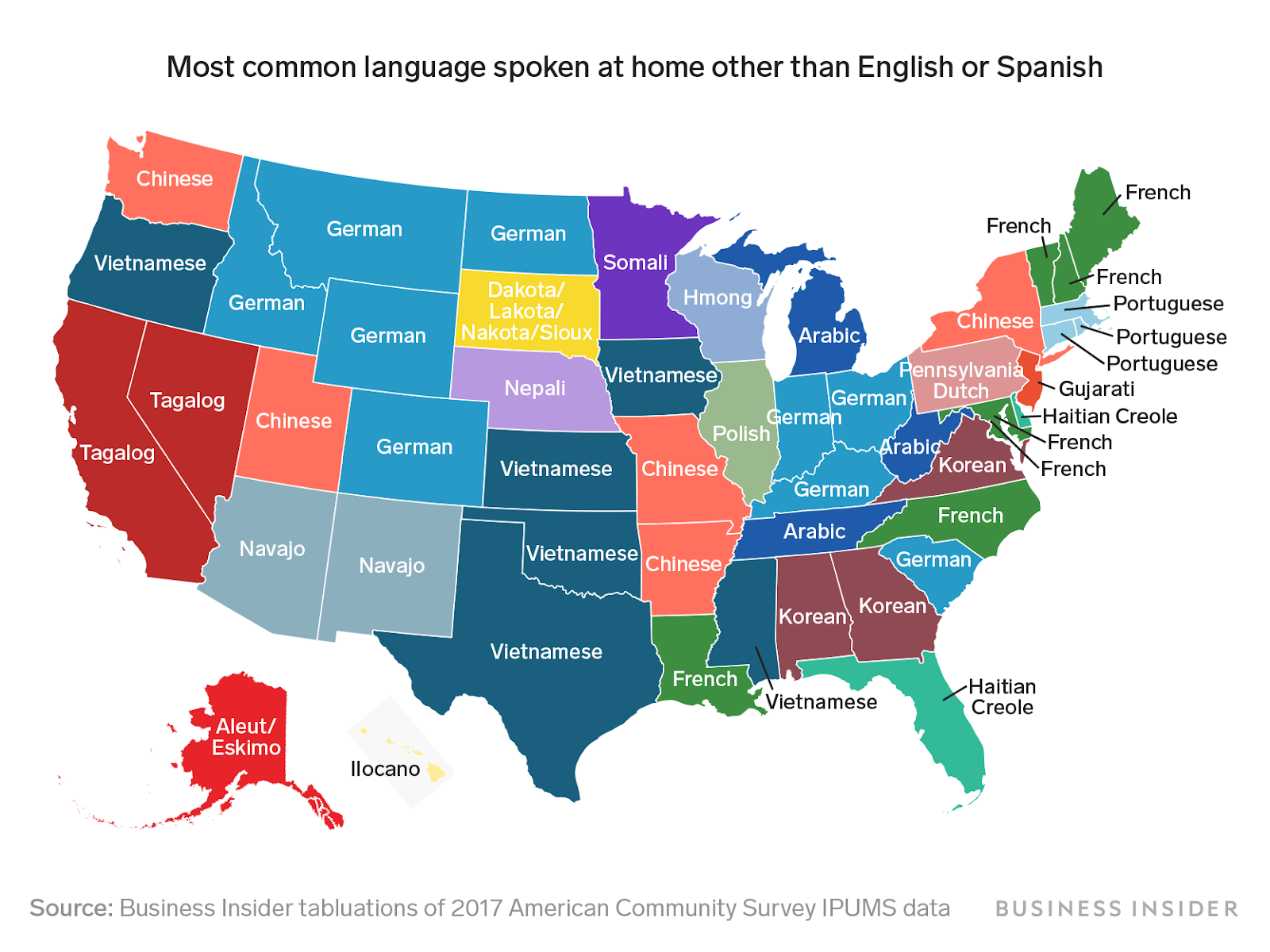 As the chart depicts, and in consideration of this nation’s indigenous and immigrant history, the sound of English spoken in America is flavored by our many heritages. In addition, not only are most non-native English speakers bilingual or multilingual, their experience of learning English, and the accented English they speak, is shaped by the cultural and linguistic assets they bring to the challenge.

Unfortunately, in some classrooms accent bias can cause teachers to expect poor performance or an inability to learn. Attitudes like these can affect students’ confidence and their learning growth. “Removing the accent bias obstacle is a step in the right direction toward ensuring educational equality for all students.” (Chin, 2010)

A first step in this direction is reframing all students’ accents and cultural heritage as assets in a diverse classroom.

Accents as an asset

One out of 10 children in the United States is an Emergent Bilingual and that number is only growing. Since 2010, the number of Emergent Bilinguals has increased by more than half a million to approximately five million learners. That’s five million learners bringing linguistic and cultural experiences that enrich and enliven communities and classrooms.

Whether English is a first, second, or third language, it is spoken with an accent. Those accents connect students to places, history, and culture. Students who speak more than one language have demonstrated advantages in their awareness of language, communication skills, memory, decision-making, and analytical skills.

A 2016 study about effects of accent familiarity on English as a Foreign Language students suggested that familiarity with an accent can aid listener comprehension (White, 2016). Focusing on the assets Emergent Bilingual students bring to the classroom offers advantages for native-English speaking students as well. Inclusivity is good for everyone. There are cognitive and social-emotional learning benefits to becoming both bilingual and biliterate: Students develop empathy through awareness and respect for other cultures and customs.

It is important for educators to understand, and help their students appreciate, the difference between an accent and pronunciation.

Accents are about different speech sounds. Think about a French speaker’s rolled ‘r’s or a Bostonian’s flat ‘a’s. They represent localized ways of speaking a language and as such, there is no wrong or right. On the other hand, pronunciation is about being understood, and therefore can be seen as right or wrong. When a pronunciation is correct, a student can communicate effectively with others, whatever their accent.

For instance, a student saying “human” with the audible “h” sound and a student, perhaps from the East Coast, saying “U-man” without a distinct “h” sound are both pronouncing the word correctly; a regional accent just changes the sound. On the other hand, pronouncing the word “respite” as “resp-EYE-te” instead of “resp-IT-e” is an error that would need to be corrected for the word’s meaning to be understood.

Research (Derwing & Rossiter, 2002) has established that “Regardless of the reasons behind the problems in communication, whether they are because of listener’s prejudices or the accent’s actual obstruction, non-native speakers may believe their accent is the exclusive cause of communication problems.” It is up to teachers to welcome students’ accents and keep the focus of language learning on the phonics, vocabulary, and word study that all students will need for the correct pronunciation that facilitates understanding.

Teachers need to help all their students appreciate the differences between pronunciation and accent and ensure any corrections they make are addressing one and not the other. Failure to do so can have dire consequences.

Research from the Brookings Institution found that "simply being classified as an EL student in school can have a direct, negative impact on students' test scores, graduation, and college-going." This is not due to the inherent abilities of Emergent Bilingual students, but rather on whether schools perceive, educate, support, and empower these students.

“Despite the fact that accent-bias is a widely acknowledged form of discrimination around the world, accent-related biases are more acceptable and less opposed than gender, religious, or racial discrimination.” (Giles & Watson, 2013; Hansen, Rakic, & Steffens, 2014) Addressing this bias must be a priority for all schools and districts committed to educational equity.

As classroom leaders, teachers must set the tone to ensure accent stigmatization doesn’t take root or lead to intolerance and discrimination. When learners get the message, explicitly and implicitly, that their accent marks them as an outsider, it has a corrosive effect on their learning process. Especially so because accents show a sense of solidarity with the student’s heritage community and indeed their cultural identity. Students can see rejection of their accent as a rejection of them as an individual.

Learners who are self-conscious about their accents could be less confident overall and therefore less likely to engage with the material or take chances by speaking up in class. Being constantly corrected on their accent, as opposed to their pronunciation, can cause an Emergent Bilingual to see their accent as the sole obstacle to effective communication.

The diversity that Emergent Bilinguals bring to a classroom must be respected, appreciated, and seen as the unique strength it is. When multilingualism is valued and seen as a resource and talent, Emergent Bilingual students are empowered to actualize their gifts and strengths, and teachers can build learning around students' existing capabilities and knowledge.

The Institute of Education Sciences reports, “Teachers using a culturally sustaining teaching approach with their multilingual students not only see their students’ language skills as strengths, but acknowledge that students’ languages and culture(s) are dynamic and contextual.”

Embracing that diversity should go beyond just an acceptance of accents. A culturally sustaining pedagogy is the straightest path to educational equity.

All educators need tools that address individual student needs, reduce the impact of time constraints, enhance their preparedness, and access actionable data to better support student achievement. As the student population continues to diversify, and Emergent Bilingual students become the rule rather than the exception, teachers will need tools that counter accent bias and that are culturally familiar and relevant to all students.

Tools like Lexia English should have (or be a part of) a purposefully designed curriculum, with imagery and perspectives that draw upon diverse cultures to affirm learners of all backgrounds and boost their sense of belonging. By embracing the linguistic assets Emergent Bilingual students bring to the classroom, school leaders can create higher levels of community engagement and better academic achievement for all students. Every student deserves the confidence of speaking English with their own accent, in our ever-globalizing world.

Learn more about Lexia English and its characters. 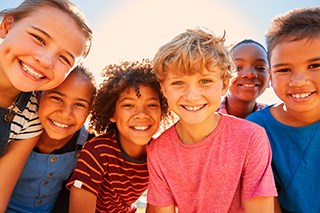 Researchers have established how reading develops in the brain, and there is no war about how to teach students to read. Michelle Elia, Ohio Literacy Lead for Ohio Department of Education, believes the next step is applying that research to classroom practice.

Reducing Teacher Burnout: 3 Key Challenges Facing Teachers and How to Help Them Succeed

Administrators recognize the importance of acknowledging the stress teachers feel in their careers and the need to provide meaningful support. Whether it’s balancing workloads or building community so teachers don’t feel so isolated, administrators can do more to help teachers be healthy and successful.

Are You Wondering about Your Understanding of Phonological Awareness?