Including Parents as Partners in Social-Emotional Learning

A rising number of schools are using social-emotional learning (SEL) to round out their academic focus at a time when our country's students are more likely than ever to come from multicultural, multilingual backgrounds.

Indeed, more than half of today's public-school students are students of color, and a growing percentage of K–12 students are non-native English speakers. So, how do these trends relate to SEL?

As explained in a 2016 SEL guidebook co-authored by Roger Weisberg, Joseph A. Durlak, Celene E. Domitrovich, and Thomas P. Gullotta, SEL is built upon a foundation of self-awareness and social awareness that includes the ability to "understand, empathize, and feel compassion for those with different backgrounds or cultures." In other words, using SEL as a bridge-builder to honor the diversity within the classroom can facilitate the creation of a common school culture centered on agreed-upon norms and behavioral standards.

Bringing parents into the mix

Traditional SEL efforts primarily target students and educators—but just like academic learning, social-emotional development does not stop at the end of the school day. With this in mind, Los Angeles teacher Amber Barth kicks off every year with a SEL-focused game that involves not just her fifth-graders but their family members as well.

According to The 74 Million, Barth encourages interpersonal connection-making by having students participate in "a bingo game that requires them to find people who share common interests and life experiences." While the kids are playing the game, Barth engages with the parents and caregivers in the room by "enlisting them as partners from day one" and stating that she "will be counting on them to reinforce these ideas at home."

This approach emphasizes the five "core competencies" of SEL identified by the Collaborative for Academic, Social, and Emotional Learning (CASEL)—namely, self-awareness, self-management, social awareness, relational awareness, and responsible decision-making. And while the CASEL-developed framework is primarily applicable within the classroom, there is no reason why it cannot be expanded to include parents as partners.

Quoted by The 74 Million, researcher Jennifer Miller characterized parents as "the owners of the knowledge" about each student and how to reach them. Through this lens, educators entirely unfamiliar with SEL as well as those accustomed to classroom-centric SEL efforts can quickly recognize the importance of enlisting parents. And while activities like Barth's bingo game forge parent-teacher partnerships on an individual level, district administrators can more widely apply SEL strategies to drive engagement throughout the school community.

For instance, Susan Ward-Roncalli, SEL facilitator for the Los Angeles Unified School District's Division of Instruction, encourages parents to participate in surveys, solicits their feedback on curriculum and service development, and sends home newsletters to keep everyone updated. After all, as Ward-Roncalli told The 74 Million, "We don't want to put our resources behind something parents aren't [behind]."

On the other side of the country, the New York State Education Department is going one step further by working to achieve "systemic whole-school implementation" of SEL. According to the department's March 2019 policy manual, this involves ensuring non-teaching staff like cafeteria workers, clerical employees, and bus drivers are included in SEL initiatives such as professional development, needs and resources assessments, and key stakeholder groups. By making SEL efforts as diverse and wide-ranging as possible, districts can benefit from collecting a variety of perspectives as they work to cultivate buy-in and cement social-emotional practices.

Referring back to the idea of using SEL as a bridge-builder, teachers and administrators eager to strengthen their relationships with parents and other members of the school community can leverage SEL concepts to foster an environment of collaboration and cooperation across the board. 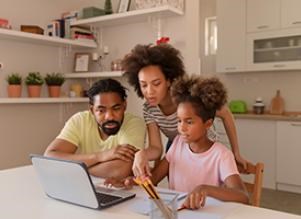 A short interview with Dr. Liz Brooke about returning to school post-pandemic, and how Lexia Learning uses the science of reading to create edtech that can empower ALL students and educators, regardless of the learning environment.